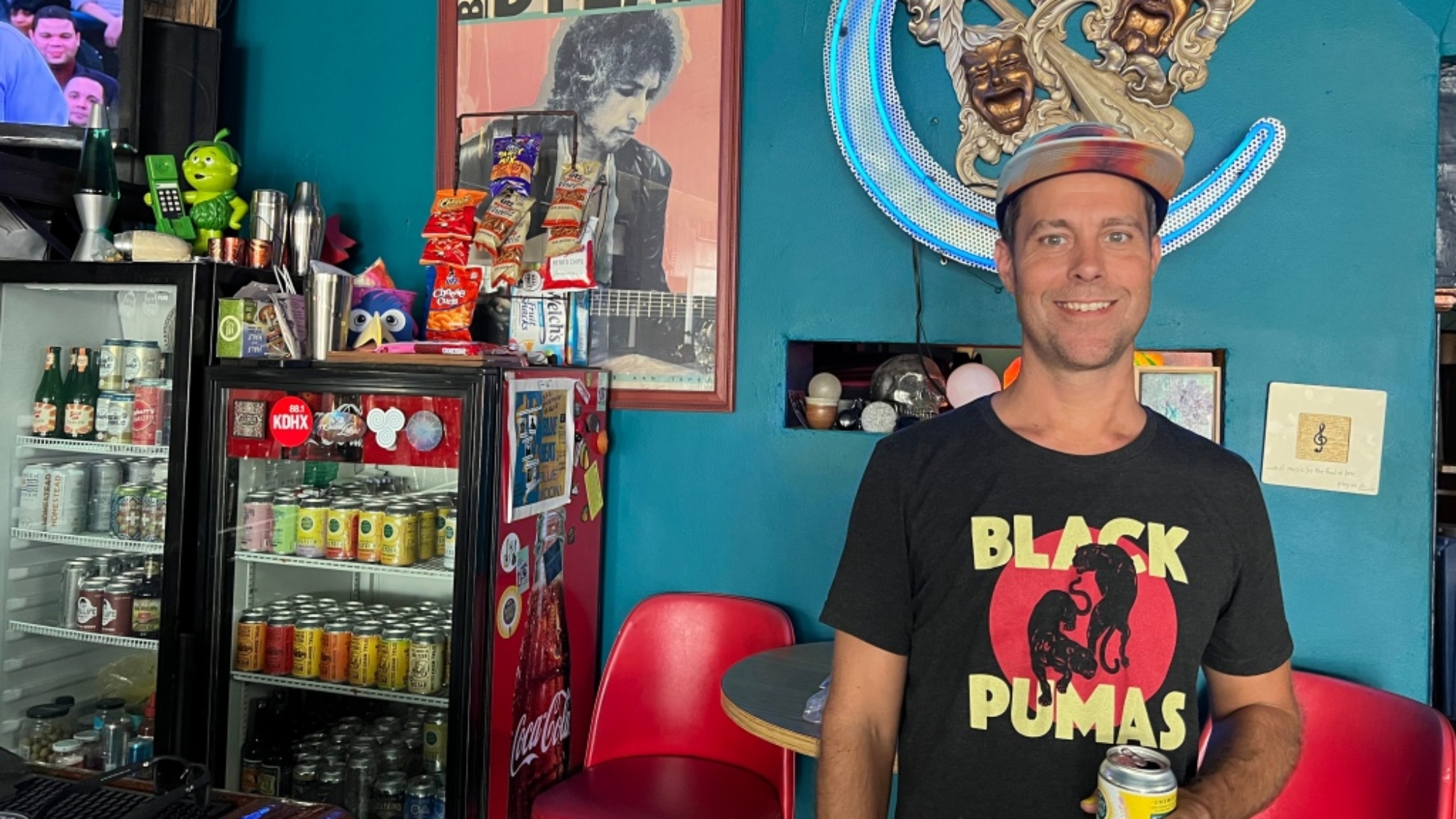 ST. LOUIS — It was not shocking that people listening to musicians covering Grateful Dead and Phish songs in October at a dive bar here would be interested in trying a new drink containing delta-9 THC, the primary psychoactive ingredient in weed.

What was unusual was seeing a bar owner — in this case, Pop’s Blue Moon’s Joshua Grigaitis — grab cans of the drink and give them to customers without looking over his shoulder in a state where recreational pot remains illegal, for now. Missouri voters will decide whether to liberalize the law in the Nov. 8 election.

“Contains 10mg of the good stuff, which equals less than .3% by volume. This means it can be sold almost anywhere!” Grigaitis posted on Facebook last month when he announced the new products from his Mighty Kind cannabis-infused drink company: hemp-derived delta-9 THC seltzer in “cherry blossom” or “heady lemon” flavors.

Grigaitis thinks he is on solid legal footing in selling the seltzer because it comes from hemp, not marijuana, two plants from the same Cannabis genus. Still, he labels the cans with the percentage of THC by volume, which refers to a federal limit allowed for hemp, anticipating scrutiny of his product.

Rather than offer his drink in the crowded market for medical and adult-use marijuana — which remains illegal at the federal level and faces costly taxes and regulations where legal at the state level — Grigaitis thinks a loophole in a federal law concerning hemp allows him to sell a product that offers the same sort of buzz at his bar, online, and just about everywhere else.

As such, he said, hemp-derived delta-9 tetrahydrocannabinol products have the “potential to flip the entire cannabis industry upside down.”

Grigaitis is not the only one who senses an opportunity. Some 120 brands are selling hemp-derived delta-9 products online, according to an April study published by CBD Oracle, which reports on the industry.

But others in the cannabis industry are concerned about the loophole and are seeking federal legislation to prevent people from selling intoxicating hemp products outside of dispensaries. They say some of the products aren’t safe because minors could access them more easily than products from dispensaries. And they generally aren’t subject to oversight from state regulatory systems. The critics also claim that the products subvert the intent of a 2018 federal law that removed hemp from the federal controlled substances list.

“The medical marijuana and recreational marijuana industries are very regulated to the point where identification, passports, driver’s licenses are all held very tightly at these dispensaries,” said Eric Wang, vice president of sustainability for the U.S. Hemp Roundtable, a Kentucky-based trade group.

By contrast, he said, a 12- or 13-year-old child can buy a hemp-derived product legally.

When a bipartisan group of lawmakers passed the 2018 Farm Bill, the advertised aim was to help struggling farmers by allowing them to grow industrial hemp. The law also meant people could sell CBD across state lines. CBD has since become a multibillion-dollar industry.

At the time, then-Senate Majority Leader Mitch McConnell, a Republican from Kentucky who sponsored the legislation, said of hemp that “everybody has figured it out that this isn’t the other plant.”

The primary difference between marijuana and hemp is that hemp contains very small amounts of THC. The federal law states that it can contain no more than 0.3% delta-9 THC on a dry-weight basis.

Grigaitis argues that his hemp-derived delta-9 beverage is legal because the amount of THC in the beverage is less than 0.3% of the weight of the liquid.

“That is supported by my lawyers, my test labs, my insurance, my bank — everyone,” said Grigaitis, whose Mighty Kind drinks appear in the recent Kevin Smith movie “Clerks III.”

His hemp-derived delta-9 is made from one of two methods: extracting the cannabinoid from the hemp plant itself or through a chemical conversion in which CBD from the hemp is dissolved in a solvent, Grigaitis said. The company is exploring both methods to determine the pros and cons of each, he said.

Because the source is hemp rather than marijuana, he sees a clear path to selling his product beyond dispensaries, which come with extensive regulations and taxes and thus narrow profit margins. Why would he sell in a dispensary, he asked, “when you could go next door into a CBD shop or a vape shop or a grocery store or a bar and sell your stuff?”

But some in the industry disagree with Grigaitis’ interpretation of the federal law. The proportion of the dry weight refers to the amount in the plant, not a beverage, said Jonathan Miller, general counsel for the Hemp Roundtable.

Rep. Chellie Pingree (D-Maine) has introduced legislation that would amend the 2018 law with additional restrictions on hemp-derived products. Pingree spokesperson Victoria Bonney said the congresswoman was not available for an interview.

In the meantime, at least a dozen states have passed laws limiting sales of another hemp-derived substance, delta-8, which is also intoxicating but not as strong as delta-9. But states have been slow to catch up with these new drug products.

Miller hopes parts of Pingree’s legislation will be included in the 2023 Farm Bill, given the 2018 bill expires next year. The roundtable seeks regulations to limit the amount of THC in finished products rather than in the plant alone and to restrict the sale of intoxicating hemp products to the adult-use marketplace, such as at a pot dispensary, Miller said. Alternatively, the group wants it regulated like alcohol.

The organization includes board members from some of the biggest companies in the adult-use marijuana marketplace, including its president, Pete Meachum. He is a lobbyist employed by Cronos Group, a Canadian cannabis company whose largest shareholder is Altria, maker of Marlboro cigarettes and an investor in Juul. Meachum declined an interview request.

“Anything that threatens the exclusivity of the regulated market is going to be of concern to those that have their time and money invested in it,” Grigaitis said.

But Miller said that with new federal regulations, hemp-derived products “would be available in the same locations where you can buy marijuana products, so there would be an even playing field.”

Other industry groups and the National Organization for the Reform of Marijuana Laws have also called for the FDA to regulate hemp-derived products.

In the meantime, the Pop’s Blue Moon patrons didn’t seem worried about the lack of regulation and were happy to try Grigaitis’ new seltzer. Harper Britz, a 21-year-old who works in the music industry, said she got a pleasant buzz from the seltzer. She liked that she could taste the cannabis.

“It gets that aroma on the nose, just like when you’re smelling wine,” said Britz, who lives in St. Louis and said she regularly uses cannabis. “I’d probably drink this every day if I could.”