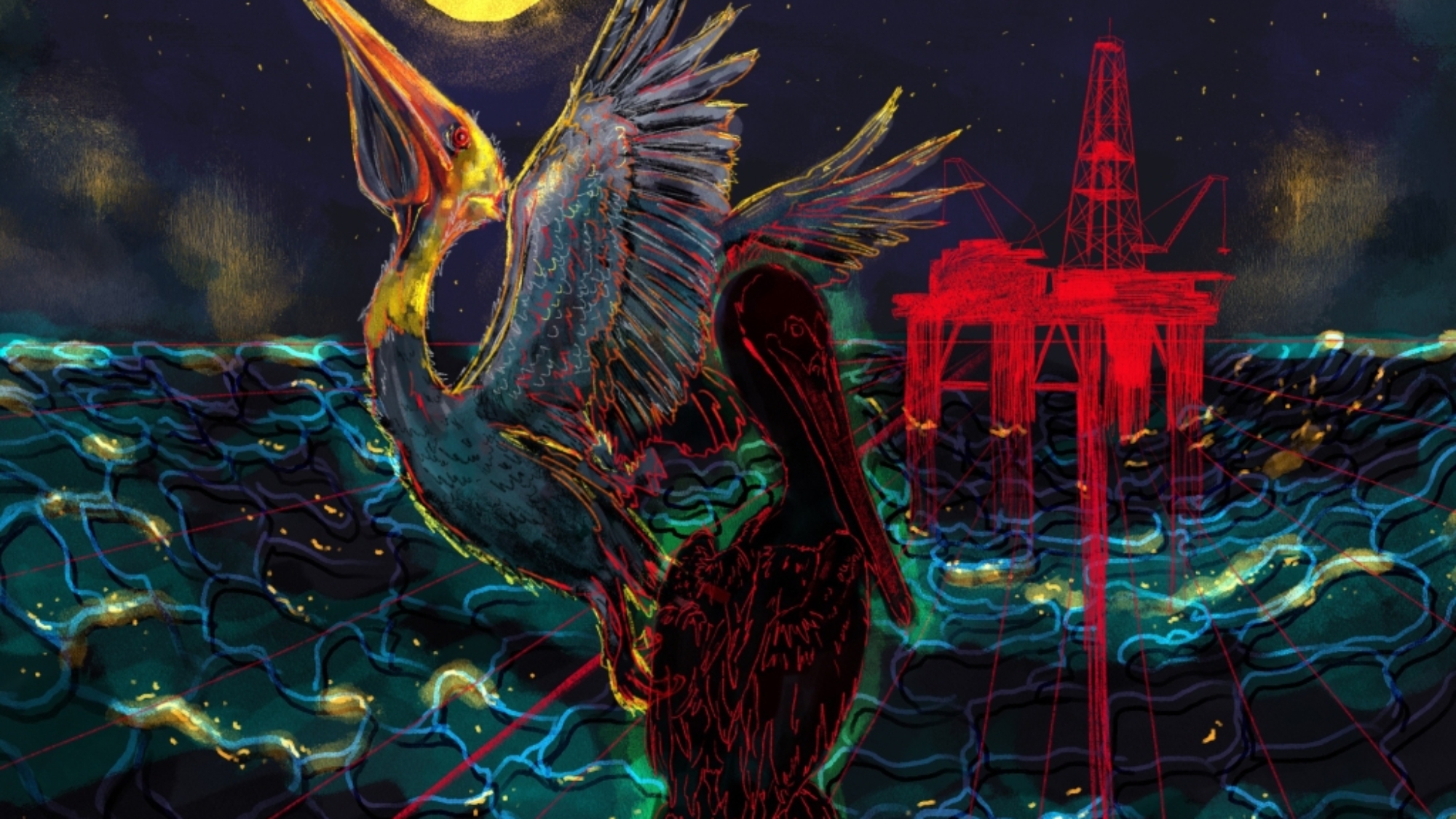 For generations, Thomas Dardar Jr.’s family has lived on a small bayou island off the coast of Louisiana called Isle de Jean Charles. Environmental changes, rising seawaters, and storms have dramatically changed the island. Home to members of the United Houma Nation, the island is now about 320 acres, a sliver of the more than 22,000 acres it was in the mid-20th century.

Massive hurricanes, including Katrina and Ida, have raked the area. Relief efforts struggled to meet the devastation caused in 2005 by Hurricane Katrina, which killed more than 1,800 people along the Gulf Coast, swept away coastal land, and caused more than $100 billion in damage. The island’s only road to the mainland is often impassable because of strong winds and rising water. Encroaching water has made growing food difficult.

Now, just a small number of citizens live on Isle de Jean Charles, Dardar said. “We’re losing land here in Louisiana — used to say a football field every 90 minutes,” said Dardar, a former chief of the United Houma Nation, which has about 17,000 members. “Now it’s quicker than that.”

In 2016, Louisiana’s state government received a federal grant to help resettle island residents, among them the Houma. Some people do not want to move. For many others, moving is a hardship.

Displaced by the loss of land, infrastructure, and cultural heritage along Louisiana’s southern coast, members of the United Houma Nation are among those in the region most vulnerable to climate change and its repercussions on health. Health advocates fear the consequences could be worse for Indigenous people, who experience higher rates of diabetes, heart disease, and certain other health problems than white people.

The Houma Nation is not recognized by the federal government as a tribe, but a 2015 change to federal standards could ease barriers to federal status for the tribe, more than 35 years after its initial application.

That recognition would allow the Houma to work directly with the federal government rather than through intermediaries to secure resources, said Lanor Curole, a member of the Houma Nation who oversees its day-to-day operations. Direct communication with federal officials during an emergency can save precious time in delivering critical relief to communities like the Houma, she said.

“Our people are on that front line, but we don’t have a seat at that table,” she said.

In 2010, when the Deepwater Horizon oil spill released at least 4 million barrels of oil into the Gulf of Mexico, the incident wreaked havoc on the Houma people. It polluted the region, destroyed ecosystems, threatened commercial fishing, and exposed people to toxic substances known to cause cancer. But after that environmental disaster, BP, the company using the drilling rig, wasn’t required to pay damages directly to the Houma because the tribe isn’t one of the 574 recognized by the federal government.

For federal recognition, tribes must prove they meet several criteria, including that their members descend from a historical tribe and that they are a distinct community. Dan Lewerenz, a law professor at the University of North Dakota, said the lack of federal recognition means the government does not see the Houma as a self-governing sovereign entity.

Houma leaders said the community’s status has become a barrier to getting support to tackle climate emergencies. Meanwhile, the Chitimacha, a federally recognized tribe in the region, partnered with the federal government in 2016 to develop an adaptation plan to address climate pressures.

The Houma are not eligible for care through the Indian Health Service, winnowing the already slim options in the region. According to a 2010 community needs assessment conducted by the tribe, more than half of Houma members have cardiovascular disease.

Health researchers and social scientists link the health inequities among Indigenous peoples to intergenerational traumas, with younger generations exhibiting poor health outcomes connected to their ancestors’ experiences. The historical traumas experienced by Native people in the U.S. include genocide and displacement.

In the vulnerable communities along the coast, people often don’t have the extra cash needed to rebuild after a storm, putting them at risk of losing their homes. The cost of repairing infrastructure can be astronomical, forcing some people to move elsewhere and leaving already resource-poor communities further choked off from necessities like schools and doctors.

“There are very few grocery stores on the bayous,” said Shanondora Billiot, who studies the effects of environmental changes on the health of Indigenous people in Louisiana. “Many people have to drive 30 to 45 minutes to get to the closest grocery store with fresh fruit, fresh vegetables because many people can no longer grow those vegetables on their soil.”

Billiot’s research on the Houma Nation found that repeated exposure to environmental disasters has taken a toll on people’s mental health, and she noticed a “sadness” among some members that she compared to symptoms of post-traumatic stress disorder. “Climate change interrupts the expression of culture and the protective factors that culture and identity have on health,” Billiot said.

For coastal residents like the Houma, every year could bring the next big storm, and with the acceleration of climate change, it is increasingly likely that it will. Hurricane season typically peaks in September and October, according to the National Oceanic and Atmospheric Administration.

“They roll up their sleeves and build, rebuild, and help their neighbors, and start over essentially,” said Billiot. “And they’re deemed resilient for it. However, citizens have talked about, ‘I don’t want to have to be resilient.’”