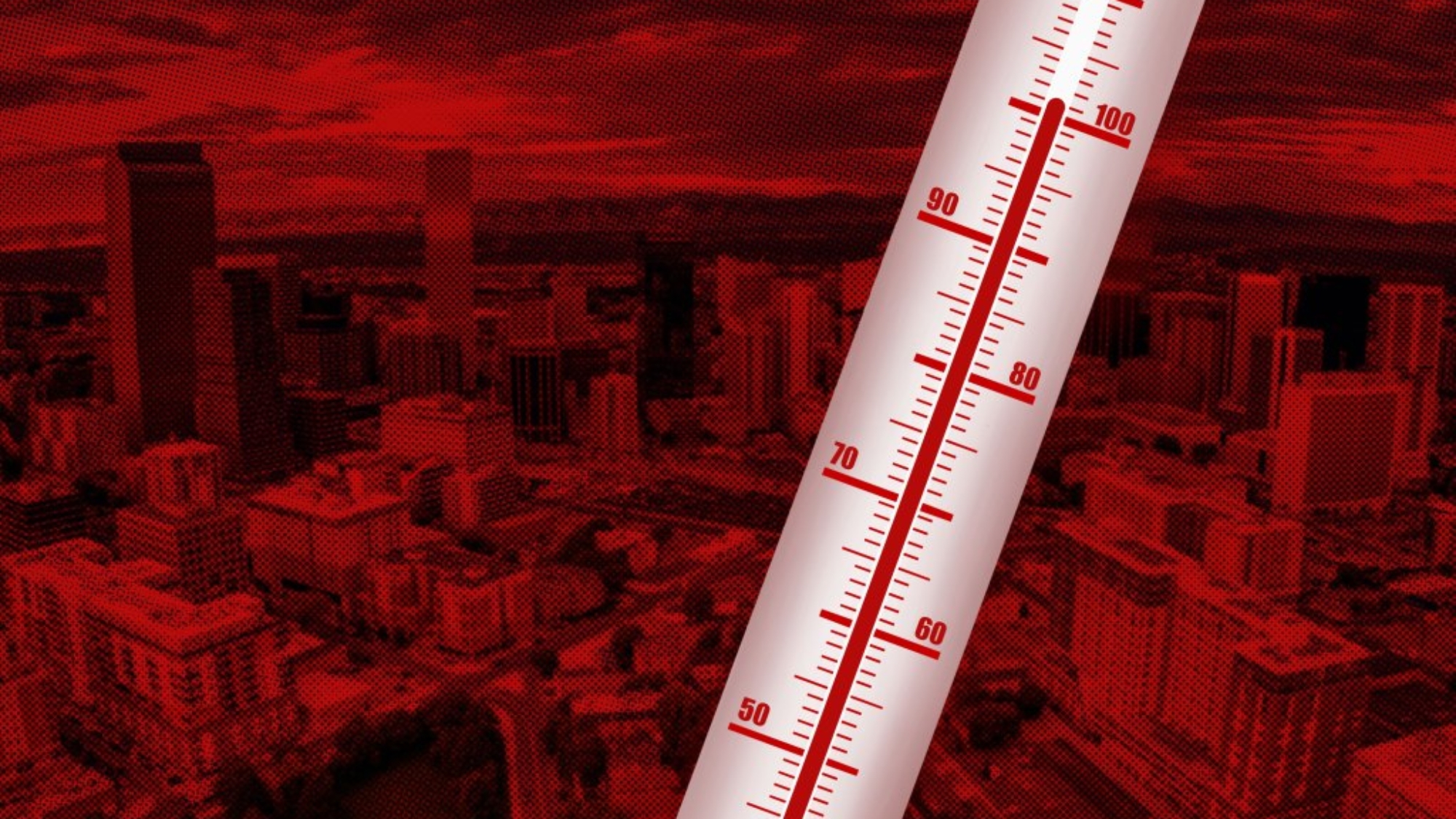 For all the images of ski resorts and snow-capped peaks, Colorado is experiencing shorter winters and hotter summers that are increasingly putting people at risk for heat-related illnesses. Yet until this year, the National Weather Service hadn’t issued a heat advisory for the Denver metropolitan area in 13 years.

That’s because the heat index commonly used by the weather service to gauge the health risks of hot weather relies on temperature and humidity. Colorado’s climate is so dry that reaching the thresholds for that kind of heat advisory is nearly impossible.

But this year, the National Weather Service in Colorado adopted a prototype heat warning index, known as HeatRisk, that is used in California and other parts of the Western U.S. and relies on local climate data to determine how much hotter than normal the temperature will be and what the hazards could be to people.

The result is a more defined standard for warning people about heat and a higher likelihood that an advisory will be issued in Denver and other areas of the state. Since adopting the HeatRisk index at the start of the year, the weather service has issued five heat advisories for the northeastern part of the state.

“We have never been able to issue them based on the old ways of looking at heat impact,” said Paul Schlatter, sciences and operations officer with the National Weather Service in Boulder. “Now with HeatRisk, it’s much easier. It shows up really nicely and gets to the real impact for Colorado.”

On July 18, for example, Denver had a high temperature of 100 degrees and a relative humidity of 13%. That put the traditional heat index at 94 degrees, below the threshold for a heat advisory, Schlatter said. But the heat was high enough under the new system to issue a heat advisory.

The weather service has three tiers of alerts about weather — advisories, watches, and warnings — but the Denver region hasn’t reached the most severe tiers. Still, even the heat advisories are crucial for public health. In Denver, a heat advisory triggers the opening of cooling centers and alerts residents to avoid exertion during the hottest parts of the day.

“If you look back before 2010, Denver would average less than one day per summer of 100 degrees or more,” said Gregg Thomas, director of the Environmental Quality Division of the Denver Department of Public Health and Environment. “Now it seems we’re in that handful of days at or above 100. It’s in line with what the projections have been saying for climate change with hotter and drier summers.”

The Boulder weather service office started evaluating the HeatRisk index three years ago and found that emergency room admissions for heat-related illnesses tended to increase on the same days that the index indicated high risk. However, that data may underestimate the true health impact of extreme temperatures because heat can exacerbate other conditions, such as kidney disease or diabetes, that aren’t counted in heat illness numbers. And research has shown that mental health conditions can flare during hot weather.

According to the Centers for Disease Control and Prevention, heat leads to more than 67,000 emergency room visits, 9,000 hospitalizations, and 700 deaths each year in the U.S. Extreme heat kills more Americans than any other type of weather hazard.

“People see heat as more of a nuisance,” said Kimberly McMahon, public weather services program manager for the National Weather Service. “The biggest challenge — no matter what index we’re using — is having people recognize that heat is dangerous and can lead to death.”

The HeatRisk index got its start in 2013, when the California Office of Emergency Services approached the National Weather Service’s western region headquarters about providing a more consistent heat advisory tool than the heat index.

The heat index criteria for issuing an advisory was lower in Northern California and in the mountains than in Southern California. State officials were looking for a simpler system they could use for the entire state. After the initial HeatRisk index was tested in California, it was adopted by the rest of the western region in 2017.

McMahon stressed that the heat index is just one way of evaluating extreme heat and that weather service offices in the western region and Colorado can use a combination of HeatRisk, the traditional heat index, and maximum temperature to determine when to issue an advisory.

The heat index was developed in 1979 by Robert Steadman, a physicist working in the textile industry, to measure how hot it feels when both temperature and humidity are high.

Recent research from the University of California-Berkeley suggests that the traditional heat index may underestimate the health risks of extreme temperatures by as much as 20 degrees. David Romps, a Berkeley professor of Earth and planetary science who conducted the research along with graduate student Yi-Chuan Lu, said they mapped the heat index to people’s physiological states and found skin blood flow so elevated at extreme temperatures that their bodies were nearly unable to compensate.

“So we’re closer to the edge than we thought we were before,” Romps said.

The researchers tweaked the formula of the traditional heat index and then applied that fix to past heat waves. They found, for example, that during a July 1995 heat wave in Chicago, which killed at least 465 people, the National Weather Service had reported the heat index as high as 135 degrees when the temperature really felt like 154 degrees. Romps said he has sent the research to the weather service.

The HeatRisk index aims to show how much hotter than normal the temperature is. For example, it accounts for whether a hot day occurs early in the summer, before people have gotten used to the heat, and for consecutive days of hot weather. The thresholds for a heat advisory using the HeatRisk index are higher in mid-summer than in May or September.

HeatRisk also factors in whether nighttime temperatures drop below 70 degrees, giving people and buildings a chance to cool off. Most of Colorado rarely has nights in which temperatures stay above 70.

Such factors are combined to determine a HeatRisk index score from 0 to 4, matched with a color scale, from green to magenta. A score of 3 would trigger an advisory and 4 a heat warning.

A healthy person may be fine when the heat risk is in the yellow zone, but older people, young children, and pregnant women may want to take precautions. Also, some medications can affect people’s ability to regulate their body temperature, putting them at higher risk even at lower risk thresholds.

It’s then up to local health jurisdictions to determine how to react to the weather service’s heat notices. Despite the warming trend — a 2-degree Fahrenheit increase in average Colorado temperatures over the past 30 years — most counties in the state lack extreme heat mitigation plans.

When Grace Hood joined the Boulder County Public Health Department as a public health planner in October, she was tasked with putting together an extreme heat advisory plan. She presented the plan to the county board of health on June 13, just three days before the weather service issued its first heat advisory for Boulder since 2008.

Boulder has had four heat advisories this summer. When public health officials tracked who showed up in the emergency room with heat-related illnesses on those days, two groups stood out: older people and outdoor athletes.

The health department then worked with the Parks and Recreation Department to identify trails with high sun exposure and posted extreme heat safety information at trailheads.

Denver public health officials only recently adopted an extreme heat plan. It includes advising people to go to cooling locations, mainly recreation centers and libraries, if they lack air conditioning at home. According to Denver public health officials, about 75% of the city’s housing was built before 1980, when summers weren’t as hot. An estimated 30% to 40% of homes lack air conditioning.

The National Weather Service is collecting feedback on the HeatRisk prototype, taking public comments through Sept. 30.

“So far, I would call it a win,” Schlatter said. “We just have a better understanding of which days are really going to be the problem days for the health department folks to focus on.”