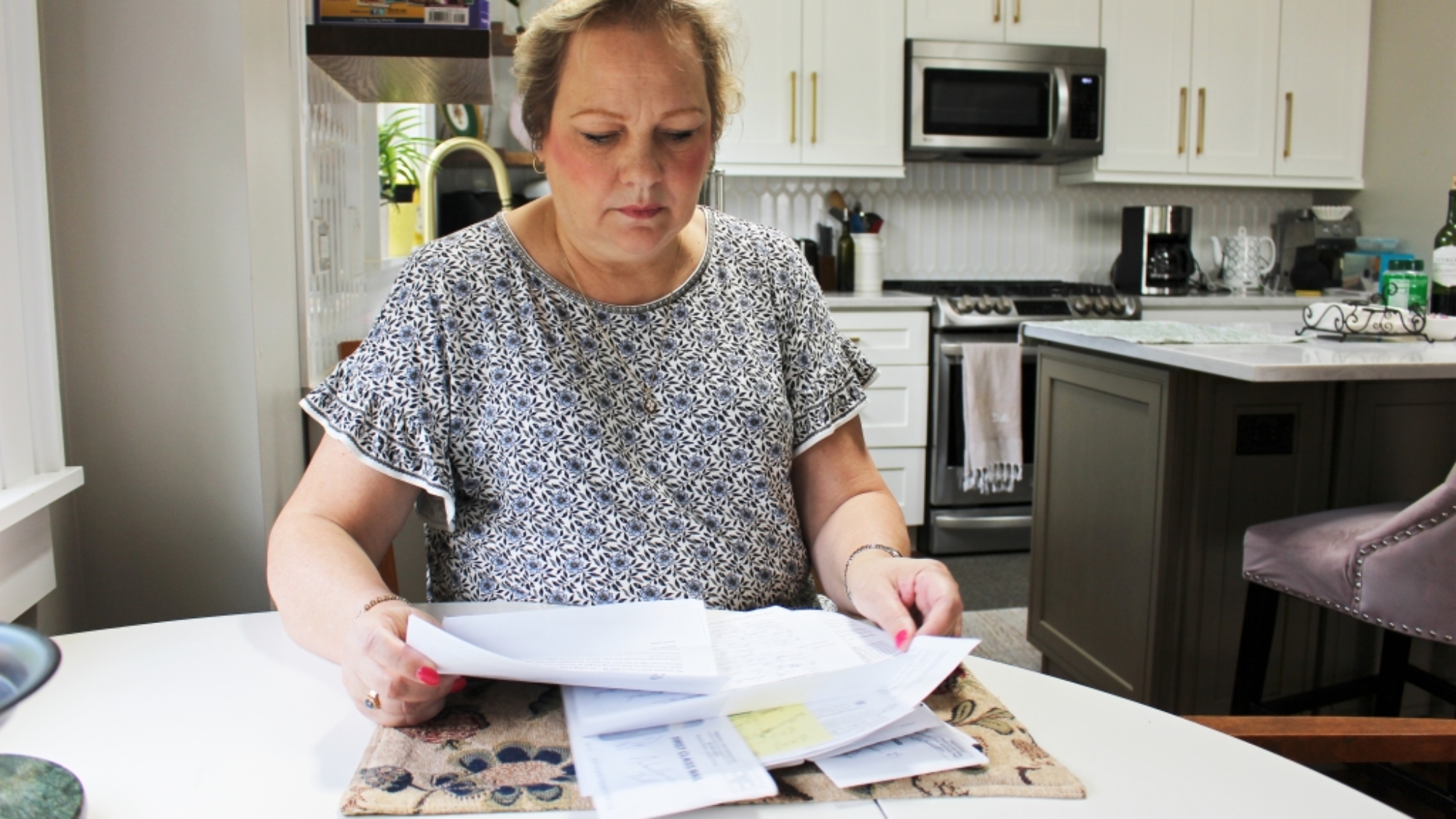 In retrospect, Peggy Dula said, she shouldn’t have taken the ambulance. She was the least injured of the three siblings who were in a car when it was struck by a pickup truck last September. Her daughter had even offered to come to the crash site and pick her up.

Jim Martens, 62, and Cynthia Martens, 63, Peggy’s brother and sister, were more seriously hurt and on their way to the hospital in separate ambulances. Peggy, 55, was told it would be a good idea for her to get checked out, too. So she accepted a ride with a third ambulance crew.

When the wreck happened, the siblings were going to see the horses that Peggy’s daughter trains at a barn west of Peggy’s home in St. Charles, Illinois, about 45 miles outside Chicago. Peggy, who was driving on unfamiliar country roads, pulled into an intersection, mistakenly thinking it was a four-way stop. The truck slammed into the car’s side, spinning it into an electrical box.

Cynthia, who wasn’t wearing a seat belt in the back seat, spent five days in the hospital with a brain bleed, a cracked rib, and a bruised lung. Jim also had fractured ribs, which he learned days later — only after he was back home in Tampa, Florida.

Peggy was “a little stunned” but mostly unhurt as three ambulances descended on the crash site, alerted by 911. She was seen briefly in an emergency room and went home with just a bruised sternum, grateful she had dodged major injury.

Then the bill came.

The Patient: Peggy Dula, 55, who works in a fine jewelry store in Geneva, Illinois.

Medical Services: An ambulance ride to a nearby hospital and brief medical evaluation.

What Gives: All three siblings were charged for the same service: “Advanced Life Support Emergency Level 1.” It’s code for transportation by a ground ambulance in response to a 911 call, and it can include medical services as simple as an assessment. All three were also charged a mileage fee. Jim and Cynthia were billed for 15 miles; Peggy was billed for 14 miles. But because they rode in separate ambulances, each from a different nearby fire protection district, they were billed three separate amounts:

And although private, for-profit ambulance companies have become notorious for pricey bills, Peggy and her siblings were being billed by taxpayer-funded fire departments.

How could charges for the exact same services vary so widely?

“The simple answer is that these bills are all made up,” said Dr. Karan Chhabra, a surgical resident at Brigham & Women’s Hospital in Boston and a former research fellow at the University of Michigan.

In a 2020 paper published in the journal Health Affairs, Chhabra and his colleagues looked into surprise ambulance bills by analyzing a large national insurer’s claims data from 2013 to 2017. They found that 71% of ambulance rides were out of network, meaning the ambulance companies were not bound by a rate that was negotiated in advance with the insurer and could basically charge whatever they want. Even local fire departments can decline to join local insurance networks.

“It often is the municipalities that are sending some of the most staggering bills and often pursuing them in really aggressive ways,” Chhabra said.

The Pingree Grove and Countryside Fire Protection District’s chief, Kieran Stout, said their charges are in keeping with the federal Ground Emergency Medical Transportation program, which allows some public emergency services to receive supplemental payments for transporting patients on Medicaid, the state-federal health insurance program for people with low incomes. Ambulance services fill out a cost report, and if their average cost per ride is higher than the set rate Medicaid pays, they get paid the difference.

But ambulance services can get their full supplemental amount even if they charge non-Medicaid patients less than that average, said Jim Parker of the University of Illinois Office of Medicaid Innovation. The program is relatively new, though, and some services mistakenly think they need to raise their charges for every patient in order to participate, Parker said.

So for Medicaid patients, the program will pay the difference between the ambulance company’s costs and the standard Medicaid payment.

But for patients with private insurance, like Peggy, the fire protection district bills patients directly for the balance not covered by their insurance, Stout said, a practice known as balance billing. He added that the district only balance-bills patients who live outside the district. In the case of Peggy’s accident, all three siblings lived outside all three districts. (Jim and Cynthia both eventually received settlements from Peggy’s car insurance.)

Congress took aim at balance billing with the No Surprises Act, which went into effect Jan. 1. The law limits the patient’s responsibility for most surprise bills, such as those from an out-of-network anesthesiologist who puts a patient to sleep for surgery at an in-network hospital or for a ride in an air ambulance, almost all of which are privately owned.

Chhabra suspects ground ambulances got special treatment because federal lawmakers felt a need to “tread lightly” around their relationships with local governments. Many ambulance services are run by municipalities and may need to bring in enough revenue to pay their expenses.

“This might be what they need to do in order to cover their own budget,” Chhabra said.

Resolution: Peggy said her insurer, BlueCross BlueShield of Illinois, deemed the “reasonable and customary rate” for the services Peggy received to be $1,892. It applied $400.23 to her deductible and then paid $895.06 — 60%, according to the cost-sharing requirement of Peggy’s plan. Pingree Grove and Countryside then billed Peggy for the balance of their charge, $2,710.94.

Peggy challenged the balance with Paramedic Billing Services, the company that handles the district’s billing, citing her siblings’ much lower charges. “Needless to say, I am speechless at the outrageously high bill I received,” Peggy wrote. “I am willing to pay $354.94, which (with my insurance payments) equals the amount my sister is being charged for the exact same ride.”

“They really weren’t working with me, were they?” she said.

The Takeaway: Getting into an ambulance involves financial risk. Your health may demand it. But your wallet may suffer. So understand your options.

Obviously, if you’re seriously hurt in an accident, you have no way to figure out whether the ambulance that turns up is in your network.

However, if you feel well — just a bit banged up or with a laceration from a car crash or a fall from a bike — remember this: You do not have to get in just because an ambulance rolls up. They arrive because they’ve been informed of an accident by police or because a bystander has called 911.


His-and-Hers Cataract Surgeries, But His Bill Was 20 Times as Much


After Medical Bills Broke the Bank, This Family Headed to Mexico for Care

Calling a friend or car service like Uber or Lyft to drive you to a doctor, urgent care, or a hospital emergency room could save you thousands of dollars. (And please do seek timely follow-up care on any possible head injury.)

It’s also worth knowing whether your local fire department’s ambulance service is in your insurance network, information that might influence your decision.

Of course, this all raises the larger question of whether ambulance operations should be revenue generators at all.

“Or should it just be something that’s a public good that we pay for out of our taxes like the fire department or police department,” Chhabra said, “none of whom I’ve ever heard of anybody getting a bill from?”

Bill of the Month is a crowdsourced investigation by KHN and NPR that dissects and explains medical bills. Do you have an interesting medical bill you want to share with us? Tell us about it!